It’s Not the Size of the Community, but the Way It’s Set Up. | Little Flower Yoga

Jennifer had a really strong intention to create a unique learning community for her business.

After an intensive search that lasted for years, she stumbled upon GroupApp in the eleventh hour; they were just about to launch their biggest training of the year.

After the demo, she knew this was the platform she needed for her Little Flower Yoga.

Read on to learn how GroupApp solved the problems and challenges Little Flower Yoga had and how Jennifer managed to build a thriving and engaging community in just a couple of weeks.

What is the Little Flower Yoga community about?

When Jennifer founded The Little Flower Yoga in 2006, she wanted to help kids thrive through trauma-informed yoga and mindfulness.

First, she worked with the Harlem Children’s Zone, then with New York City Public Schools, sharing trauma-informed yoga and mindfulness practices with students, teachers, and the entire school community.

After a while, she expanded her business to include adults who want to learn how to incorporate yoga and other body-mind practices into their work.

But she didn’t stop there!

Now, programs and resources are available for classroom teachers, mental health care providers, occupational therapists, and life coaches. They are all part of her mission to share yoga and mindfulness practices with children and adolescents. 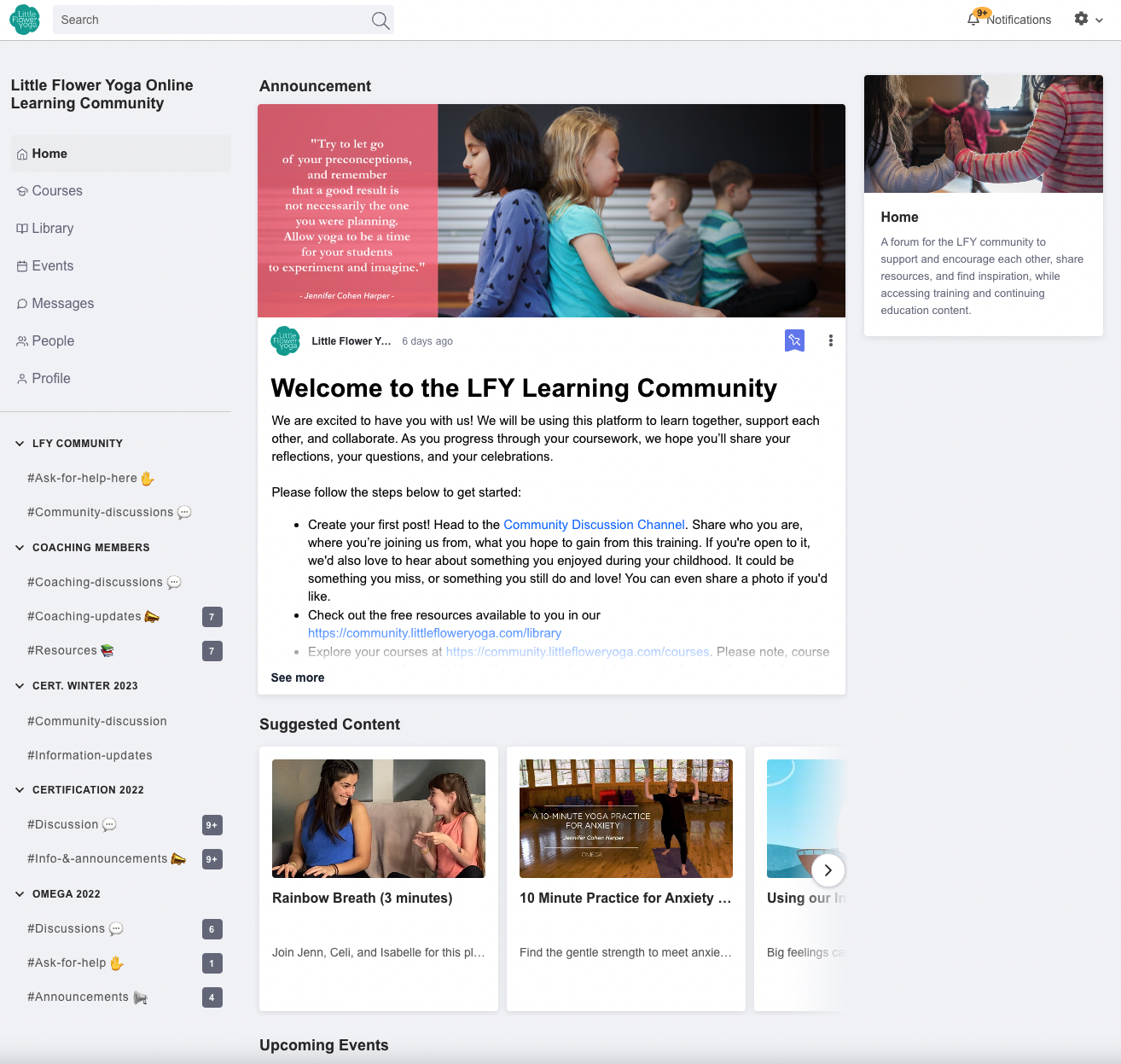 Problems and Challenges Before GroupApp

As the number of people interested in her training grew, Jennifer knew she had to adapt how she shared her courses and move from in-person training to the online world.

After COVID, she offered a lot of online content but couldn’t tell how the participants interacted with it. It was important to track and analyze what was happening because she didn’t want just to share it and leave it be.

She was looking for a way to create connections between the community and form a learning system similar to the one they had for in-person training and workshops, where participants would engage with each other and connect.

To do so online, Jennifer tried group email threads and created a Facebook group (thousands of people joined but were hesitant to share and mostly inactive), and when none of those worked 100%, she began an intense search for a new way to deliver content.

All of that was about to change

Luckily, Jennifer found out about GroupApp in an article. Even though she knew a little about the platform, she signed up for a demo.

She saw how GroupApp could help her build a community where current members could share experiences, discuss courses, and help each other with challenges they were facing.

Also, they hoped that a well-organized and interesting online space would help them reach people who wanted to join, study yoga and mindfulness, and be a part of the community but couldn’t because they lived too far away, had families, or didn’t have enough money.

They now have members across the country, and even the world, who are learning and contributing to the community daily.

There’s one thing Jennifer never wanted, and that is for The Little Flower Yoga to be like:

“Here are the courses, and now we are hands-off. We have always been focused on cultivating community.”

Here’s what GroupApp and its outstanding features did for Little Flower Yoga.

Jennifer explained how they needed to launch the community immediately; they had an important training scheduled.

As the date of the training approached, they felt more pressure. But the success of the event depended a lot on their effort. They were far down the road and made a pivot using GroupApp.

“The platform was so user-friendly and intuitive that we were able to put together a huge course containing 83 lessons in record time and start inviting people. And when the participants started coming in, they were amazed at how smoothly everything ran. It was a huge success, and we all breathed a sigh of relief.”

They quickly scheduled orientation and did a Zoom call with participants. While on the call, they sent out the link for everyone to join. It was an immediate good feeling, inviting people to join and seeing them become a part of it and engage.

Even though Little Flower Yoga has a couple of thousand members in their Facebook group and they wanted them all in at once, we’ve suggested they start slowly and invite the most engaging members to join first.

As people started flowing in, they started creating profiles and introducing themselves to others.

From the initial moment, this was a genuine human experience.

Firstly, they got on the platform, familiarized themselves with its features, and met one another.

Secondly, they started to learn.

A sense of safety and belonging

One of the most important things Little Flower Yoga does is train people to teach kids. And kids need to have a sense of safety and community, but this can only translate once adults actually feel connected and comfortable enough.

GroupApp managed to create the space Little Flower Yoga needed, but Jennifer and her team really approached it maturely and made it work. Consequently, a lot of people who are members of this community on GroupApp and are learning from LFY are now teaching kids online too!

Little Flower Yoga had an effortless transition to GroupApp

For Little Flower Yoga, joining GroupApp was a celebration; they were excited and proud to be part of it. Usually, trying a new platform for the first time gives people a sense of anxiety because they don’t know what they can expect.

From the moment she joined, Jennifer was amazed by the simplicity and the fact that she and her team quickly got used to the platform. Despite this being a busy period in their professional lives, the transition was seamless.

And since the team had no stress about joining GroupApp, the participants were also open and excited to get on board. Jennifer told them that this was a new thing they wanted to try out, and if anyone had any struggles, they could address them freely, creating a sense of safety and willingness rather than angst.

Jennifer and her team knew from the beginning that they had to keep people engaged and connected, so they set the tone in their emails, orientations, and descriptions of the community.

It was important to let people know right away that this is the place to connect with others, talk, encourage other members, and ask questions while taking the courses.

As they simply explained it:

This is a learning community. There are things to do besides the classes.

They made sure everyone knew how important it was to share because they really wanted to teach that value. People are usually scared that they are taking up too much space, so they made sure to set the tone that they want to hear from them.

Jennifer and her team put reflection questions in every course in their community to get people to connect with the topics on a personal level. They asked people to share specific takeaways from lessons inside the community.

They encouraged members to comment on at least 3 other members and jump-start the idea that it’s okay to comment.

The most valuable learning experiences happen from participant to participant, and other participants are always the best resource. They are constantly enforcing this idea within the community.

Another thing they do is organize pairs or team work where members of the community work in small groups and exchange ideas.

The beauty of working this way is that sometimes it happens that people connect and continue communicating outside of GroupApp, which shows the real power of the community you can build here. They become friends and start hanging out, having phone calls or zoom calls.

Little Flower Yoga leads by example. They are the first to respond and motivate others to participate. The tone is set. Not only does joining Little Flower Yoga mean that you will learn about mindfulness and connection, but you will also be an active participant in what’s going on.

Little Flower Yoga is an active community where people contribute on a daily basis and not just about anything; they write insightful posts and share their feelings and realizations.

One of the best ways to get people to talk to each other is to use channels where different conversations are happening. Segmenting communication into different channels is important to prevent the community from being noisy and difficult to participate in.

Lessons LFY Learned from This Experience

Little Flower Yoga has learned a lot from its experience launching its community on GroupApp.

Their first step was learning how to be engaged. It sounds simple enough, but it was something that Jennifer and her team had to work on in the first month or so.

If somebody had a question, they worked as a team to ensure that someone always responded. Their goal from the start was to create a dynamic environment where people felt welcome and encouraged to ask questions or share their thoughts. It was important that everyone felt like they were part of the conversation.

Provide support in the community

When somebody shares a post, the response will come from the community. Even if members asked for help through a message or email after they posted on GroupApp, LFY would respond in the community. They wanted to encourage others to ask questions here because they would get the fastest response, and they wanted to let their members know that this is where the team and everyone else is.

It’s not the size of the community

It’s not the size of the community but the way it’s set up—this is one of the biggest takeaways for LFY.

Their much smaller community on GroupApp is much more effective and interesting than the Facebook group with a few thousand followers that is being migrated over to GroupApp. Their commitment allowed us to learn more about the platform and what type of content engages people and motivates them to share.

This is just the beginning

Jennifer and her team are now using more features on GroupApp, and they especially enjoy the Library feature, where they can host and share community resources with members.

They are excited about continuing to share their knowledge with a growing number of people on GroupApp.

Little Flower Yoga shows how impactful building a healthy and intentional online community can be for any business. Not only will this improve the educational experience for your participants, but it will also greatly simplify your job and increase the profitability of your online business.

Follow in the footsteps of Little Flower Yoga and other successful businesses who are on GroupApp, and start building your community today!